Police in Harrogate a urging residents to review their security arrangements to help keep thieves at bay during the summer months.In recent weeks there has been a slight increase in shed burglaries which has resulted in gardening equipment and tools being stolen.
Officers are keen to stress the importance of securing sheds and outbuildings as the weather improves and summer approaches.
Temporary Sgt Tom Barker, of Harrogate police said: At this time of year it is quite common for the police to see an increase in shed break-ins.
Equipment such as strimmers, leaf blowers and chainsaws are attractive to thieves due to their value. They are often easy pickings for criminals, if they are left in sheds or outbuildings in remote or secluded places where thieves are unlikely to be disturbed.
Always move equipment so it is secured away and out of sight. Please take this as a reminder to go and check your shed to ensure you are happy with the security.
For more information about securing your property from thieves, visit the North Yorkshire Police website www.northyorkshire.pnn.police.uk/homesecurity

Gardien Comment: There is always an increase in theft from sheds at this time of year. See the article on Shed Security at  http://www.garden-security.co.uk/shed-security-print.htm
Posted by gardien No comments: 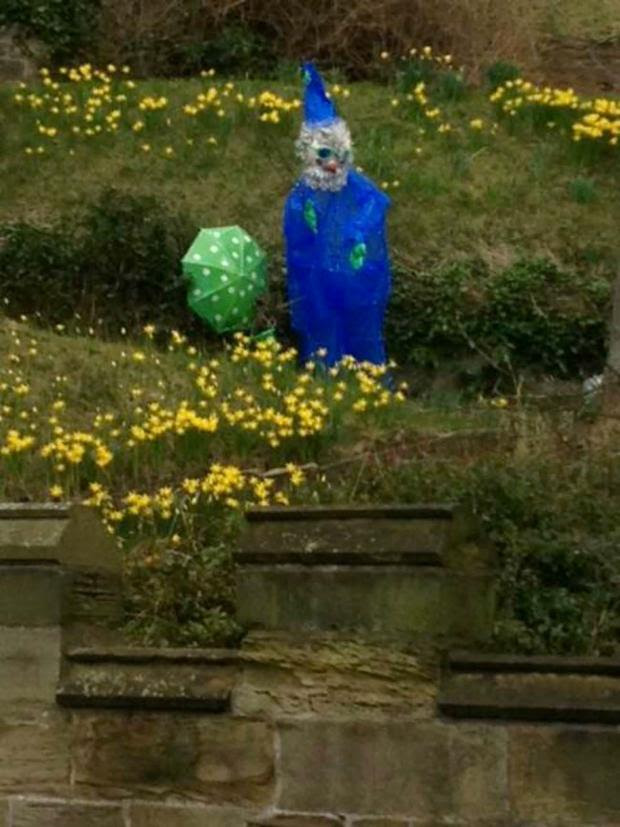 THE CRAZE of stealing garden gnomes has reached new heights with the theft of a rare eight foot example.

Police confirmed today (Monday, March 17) they are looking for a giant gnome stolen from the master’s garden at Durham Castle shortly after midnight, on Saturday.

The illuminated blue "gnome" formed part of Echo of the Lumiere display by Durham University students, which ran until yesterday.

Internationally-renowned artist Goshka Bialek says she is seeing the funny side of it, but wants the gnome back.

Ms Bialek said: “My gnome was very ugly. And that was the point of it. I made it as ugly as I could – to challenge perceptions and provoke debate on gnomes, ugliness, taste and tolerance.

“Some students said it was ugly and shouldn’t be in the master’s garden.

“I said to them many people have gnomes in their garden - and they are very proud of them. And we have to be tolerant. People are entitled to have different tastes.”

Ms Bialek said someone knocked it down on Thursday night and the porters had put it back in place.


But between midnight and 12.30am on Saturday thieves removed the gnome.

Ms Bialek said: “I don’t have any idea who could have taken it. It could be hidden away somewhere.”

Gardien Comment: The ugly face of crime or the height of cheek?
Posted by gardien No comments:

The number of burglaries go up in the spring, so police in Aylesbury Vale are trying to tackle that with a 'day of action'.Officers say burglars normally target our homes, but when sheds or other buildings are left open in the warmer weather, they go for those as well.

Garden sheds, outbuildings and garages are a popular target as they probably have expensive items like lawn mowers, hedge cutters, pedal bikes and power tools in them.
Insp James Davies said:


"We aim to raise awareness of outbuilding, garden and shed security and we will be working in partnership with Aylesbury Vale District Council to provide local residents with vital crime prevention advice, to help prevent themselves from becoming a victim of crime during the upcoming spring period.
"I would also like to thank local businesses George Browns Ltd, D & A Sheds, and Preston & Bisset Nurseries for their help in supporting the events.
"In addition to these road shows and events, the neighbourhood teams will be carrying out high visibility patrols in the town and the rural areas. The team will also be carrying out a series of Automatic Number Plate Recognition (ANPR) operations during the spring period and proactively patrolling burglary hot spot areas to target known offenders.
"We will be about and about, if you have any concerns or just want some advice and information, approach your local neighbourhood officers who will be there to assist you.
"We will also be sending out messages via Thames Valley Alert to residents with crime reduction advice, so I would urge people to sign up."

Here are the events taking place:
The town neighbourhood team will be carrying out the following events:
The neighbourhood teams and ADVC will be hosting some additional events and road shows at garden centres. The teams will be carrying out the following additional events at garden centres:
And these are some of the tips the police have for you:
(Reproduced from Mix96  20th March)

Gardien Comment:  All the above is very sound advice - quality product solutions can be found at www.garden-security.co.uk )
Posted by gardien No comments:

AN ANTIQUE Victorian garden urn has been stolen from Colwyn Bay.Police are appealing for information after the theft between 2pm on Sunday, March 9, and Monday, March 10. The large cast iron urn was stolen from the garden of a property on Abergele Road. police spokesperson said: "Due to the weight of the item it is believed that two people would have been needed to move the urn from its location."The antique garden ornament is described as 4ft high with an 18ins diameter. It is daffodil shaped with ridges running down the sides and has a lip around the top edge. It has a concrete base which measures 18ins, which was also taken.
The spokesperson added: "Inquiries into the theft are continuing and there is an appeal to anyone who has information, who witnessed the theft or may have been offered a similar item for sale to contact members of the Investigation Support Team on 101 quoting reference number RC14035771."
Aternatively, contact Crimestoppers anonymously on 0800 555 111.

Gardien Comment:  Once again we remind you that nothing is too heavy to be stolen. See the advice at http://www.garden-security.co.uk/garden-antiques-security.aspx

Police have released a photo of this “beloved” pet dog that was stolen during a burglary in St Albans on Wednesday.
The theft happened between 9pm on Wednesday, March 5 and 10.30am the following day at an address in Dellfield.
The criminals entered the rear garden and forcibly removed the dog, which is a two-and-a half-year-old male Jack Russell, that was in a shed at the time.
Pc Lee Gough, who is investigating the incident, said: “The owner of the dog has been left devastated by the theft of their beloved pet and I would urge anyone who knows of the dog’s location, or has been offered it for sale, to contact me immediately.
“I would ask anyone who remembers seeing anything unusual or suspicious around the stated times to also contact me as it’s possible you may have information that can assist the investigation and reunite the dog with its rightful owner.”
Anyone with information should contact the non-emergency number 101, or alternatively call Crimestoppers anonymously on 0800 555 111.

Gardien Comment:  Sadly there are many reports of animal theft in recent times. Extra care needs to be taken to ensure your animals are safe. See the various advice at http://www.garden-security.co.uk/garden-security-advice.aspx
Posted by gardien No comments: